Took some time to assemble this month’s zombie. It’s been a hectic month. But here he is: “Under Construction”. Eight down, four to go. 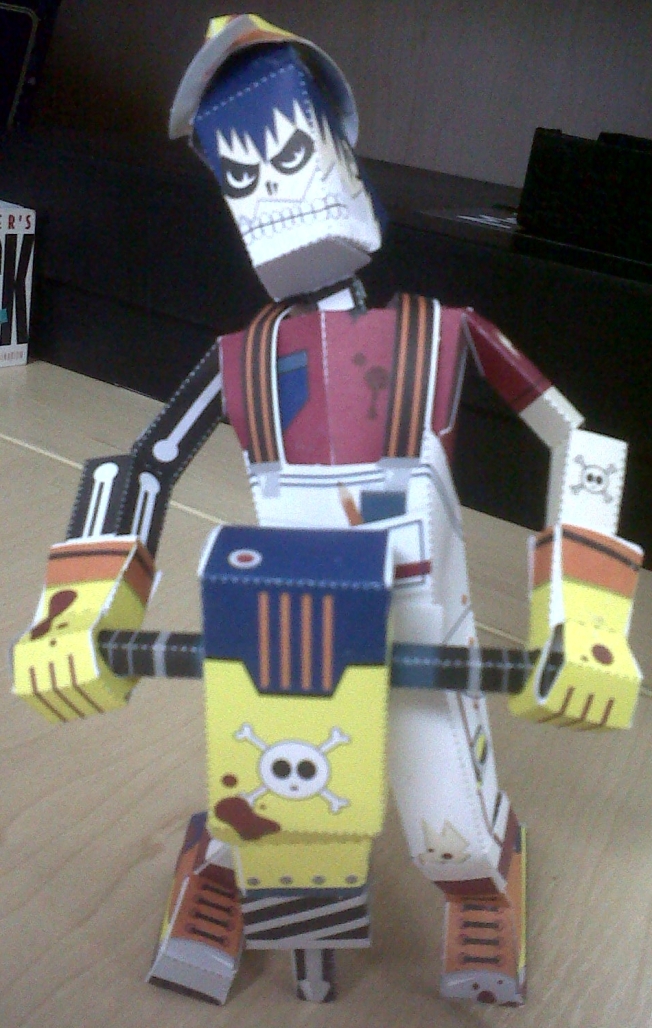 Four nights at my brother’s place and I have the following to report back:

Aside from not doing mornings, his wife apparently also doesn’t do dishes.
Her daughter (14) loves wearing makeup, and I fear for my extensive (and expensive) collection. She also talks in her sleep (and that’s apparently the least of it. At least six more weeks of this. Hooray!)
Warm baths are a myth.
Dogs are nocturnal creatures.
The neighbours are inconsiderate idiots.
We live inside Fort Knox with a crazy amount of keys I’m still trying to figure out. This resulted in my having a major hissy fit, cursing, screaming, throwing keys around, crying, etc.

This is not a promising start. My brother, bless his cotton socks, are really trying to make it nice for my mom and me, but one out of three is not really good enough. I’m focusing on the silver lining that is the unlimited internet access, but I’m not sure that’s going to sustain me for six weeks. On the upside, I’ve been asked to housesit for a friend for two weeks. If I could afford feeding myself for those two weeks I would’ve moved in there for the time, but as it is I will drive through after work, feed the pets, make sure everything’s fine, have a long hot bath and return home. I’ll crash there for two weekends, most likely staying in bed with my laptop, thus not needing extra energy/nutrition.

I’ve also come to the conclusion that while it’s really cool, the Gautrain is costing me more at the moment than what petrol does, and since I still have to drive to the station and back, I’m not really saving on time either. So from Monday I’ll be driving again. The bit of exercise I was forced to do walking from the Sandton station to my office and back was pretty cool (although my calves and leg joints will not agree). I’ll just have to spend some time with the Wii Balance Board. And cut down on sugar again – since moving back to Pretoria I’ve gained almost 5kg back (amazing what difference a third meal makes).

I’m still obsessing about money – maybe more so since my mom is worried that she won’t have enough money to finish our flat. I have nothing extra I can contribute. At one stage I was torn between giving her my entire 13th cheque in December and saving it in its entirety in an effort to start building a safety net. Initially the plan was to save only two thirds and buying myself a nice belated birthday/Christmas present. Not sure that will happen either; last month I was keen to do a high tea party at Annica’s (at less than R100 per person, despite the eight-person minimum requirement, it’s a steal!), but have since decided that I can use the money to paint my room/buy a new mattress or chair for my room, etc.

So if you feel like throwing some bricks/paint/cement, etc. our way, we will write your name in the cement (under our tiled floors, of course, but you know :P).

Pinch and punch… and the Lotus Tarot reading for the month. In short, I’m in for a bit of luck, need to listen to my instincts for a secret to be revealed, need more confidence to give up something I feel passionate about (not that I know what that is, since I’m feeling a bit apathetic), there’s a new love on the horizon (don’t know how I feel about that), get over my negativity (riiiight), but everything will turn out fine.

Card 1 (Wheel Of Fortune) : How you feel about yourself now  »

Perhaps you feel due for a bit of good luck or indeed are experiencing some at the moment. The Wheel of Fortune is a card of destiny. What is happening now we could call fate, so if positive things are happening with your love life, career or finances this is no coincidence. If no such things are happening, expect a sudden change in fortune.

Card 2 (The High Priestess) : What you most want at this moment  »

The cards suggest that what you most want at this time is for a secret to be revealed, a secret held deep within yourself or another? Go within and listen to your heart and instincts. The appearance of The High Priestess tells you that the power of the divine feminine is with you, trust it.

You are afraid that it’s out of control, you simply cannot resist this passionate attraction. Despite the fact its addictive and unlikely to be right, you just can’t stop yourself. Whatever it is, a passion for someone who’s not good for you, money deals that are too good to be true or any other kind of temptation, try to resist, as it is unlikely to have a positive outcome. If you’re feeling low in self-belief and self worth and doubt your abilities, don’t, have more confidence – its not too late to change direction.

New love and commitment will enter your life, even if there’s no one on the horizon – be prepared for a surprise. Throw caution to the wind and expect joyous and happy times ahead.

Your negativity and lack of self control are your real enemies. If you are finding certain addictions in your life are taking a hold, be it smoking or drinking for example, look inward for you hearts true strength and self-belief. Change your attitude and be positive and you will reap great rewards.

A period of peace and harmony, life will flow and you will find a way of handling any difficult circumstances with calm confidence. This is also a time for patience, so if you are not sure quite what decision to make about any key issue, take your time you’ll know what to do when the time is right.

Do you remember that time…?